“People who choose a vocation strictly on economic grounds sometimes underestimate how long an eight hour day can be when there is no challenge or interest in the activities they must perform during those hours.” ~Marvin Zuckerman

Sensation seeking is a personality trait defined by researcher Marvin Zuckerman in the 1960s as a result of sensory deprivation experiments and later delineated and defined as a distinct personality trait consisting of four factors:
• Thrill and adventure seeking (TAS) – a desire to engage in sports or other physically risky activities that provide unusual sensations of speed or defiance of gravity, such as parachuting, scuba diving, or skiing.
• Experience seeking (ES) – seeking of novel sensations and experiences through the mind and senses, as in arousing music, art, and travel, and through social nonconformity, as in association with groups on the fringes of conventional society.
• Disinhibition (Dis) – sensation seeking through social activities like parties, social drinking, and sex. Dis may include engaging in activities that are a little unconventional or illegal.
• Boredom susceptibility (BS) – an intolerance for repetitive experience of any kind, including routine work, and boring people.

There have been a number of instruments created to measure sensation seeking in individuals from varied populations and backgrounds. Three of the four factors from which the subscales were developed have shown good cross-cultural and cross-gender reliability. The boredom susceptibility scale has not been as replicable across populations. However a broad general factor contributing to the variance in all the subscales best explains the relations among the subscales (Zuckerman, 1994).

Based on the research of Aron and Aron (1997) and Aron, Aron and Jagiellowicz (2012) highly sensitive people (HSPs) are the 20 percent of the worldwide population who process experience more deeply — fueled by emotion — with no difference in the sense organs themselves. Highly sensitive people subjectively process experience before acting, may be overstimulated by sensory input, are aware of subtleties before others, are highly creative, intuitive, empathic, and conscientious (Aron, 2010). Seventy percent of HSPs are introverted, while 30 percent are extraverted; approximately one third of HSPs experienced unhappy childhoods predisposing them to depression, anxiety, and other psychological issues; approximately two thirds of HSPs experienced happy childhoods and may be no different than others except in terms of their sensitivity; lastly, HSPs tend to be more deeply affected by positive and negative experiences than others due to the depth of cognitive and emotional processing (Aron & Aron, 1997). Jaeger (2004), described HSPs as intense, which seems to be an apt descriptor given the above definitions.
SPS is an innate personality trait that is often confused with introversion and shyness. Introversion, while also a trait, is primarily a measure of sociability; shyness is a learned behavior based on past negative social experiences (Aron, 1997). Taken as a whole we see a group of individuals who think deeply and feel deeply, with a trait that is not widely understood or accepted as normative (Aron, 2010). Introverted HSPs, due to their quiet demeanors and propensity for thinking before acting may appear to others as complex, aloof, unfriendly, and even unintelligent (Bendersky & Shaw, 2013).

Extraverted HSPs may appear similar to other extraverts, yet may be overwhelmed by too much stimulation and need to withdraw and recharge. This may lead others to believe they are neurotic or fragile in spite of their sociability (Aron, 2010). A last group of HSPs exist called high sensation seekers (Jaeger, 2004). These individuals actively seek out stimulation and crave the novelty of new and exciting activities. HSPs with high sensation-seeking tendencies may find themselves simultaneously pulled toward stimulation, yet repelled by too much. Aron (2010) referred to high sensation seeking as having one foot on the brake and one on the gas meaning the craving for stimulation is equally as strong as the need to moderate its intake.
Gender dimensions 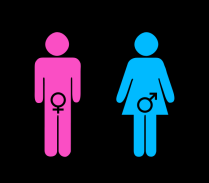 Gender is a broad construct that is socially derived and culturally specific. The division by biological sex assignment is reinforced by what are known as gender role norms. Connell (1995) referred to these as hegemonic masculinity. Donaldson (1993) defined hegemonic masculinity as comprising several key characteristics males are supposed to embody including violence and aggression; emotional restraint, courage, toughness, risk-taking, competiveness, and achievement and success. Males who fail to present this version of masculinity, including gay males and males who act even slightly effeminate or who fail to completely adhere to the hegemonic view of masculinity, are subject to ridicule, shaming, and physical and emotional abuse (O’Neil, 1981; Pleck, 1981). Further, males are conditioned from a very young age to believe that aggression and lust are the only acceptable forms of expression (Zeff, 2010; Slater, 2009).
This narrow interpretation of masculinity serves as a gulf that divides the way sensitive males and sensitive females experience life. Many of the qualities of an HSP are more closely identified with the societal definition of femininity than masculinity. Thus, it is more likely that a female HSP will be accepted for exhibiting emotionality, deep empathy, a susceptibility for overstimulation, and high reactivity. This divide, for many HSP males, represents a deep inner conflict calling into question their sense of “manliness,” as defined by the society. There may be real repercussions for males who do not follow this fairly narrow interpretation of masculinity in some regions. In other regions masculinity is being redefined and may lead to a broader conceptualization in time.
For the male who is highly sensitive and a sensation seeker the inner conflict may be even greater, though no less confusing. In most western societies sensation seeking is viewed as more acceptable as an expression of masculinity, even expected. The struggle for the highly sensitive male is how to simultaneously embody the four factors of sensation seeking (each to a varying degree) while experiencing a counter-intuitive inner impulse for restraint, caution, and careful planning. Too often the highly sensitive side is in for an uncomfortable time when the sensation seeking side dominates in some new activity that has not been carefully considered.
The typical image one calls up when confronted with “sensation seeker” involves risky thrills, crazy adventures, and other extreme activities. All of these are glorified in the mass media as the desired embodiment of “real” manhood and masculinity. For the highly sensitive sensation seeking male there may be more interest in experience and novelty seeking than in thrill and adventure seeking. My research seems to indicate boredom susceptibility is common, but disinhibition is less well understood, but generally agreed to as a factor in the lives of HSS/HSP males. The HSS/HSP male may engage more in interesting travel, new and novel experiences (not necessary involving risk), and activities that serve to “keep the boredom away.” The HSS/HSP male exists within a complex, dynamic space where masculinity and femininity merge into psychological and emotional androgyny.

Learning how to effectively express and equal balance of both genders in one being while negotiating a mostly invalidating society that neither understands nor appreciates sensitivity is a minefield of potential conflicts, internally and externally. It is likely many HSS/HSP males simply squash the sensitive side of themselves early in life, or have it squashed for them, by parents, friends, or peers. To do so raises the specter of repressing an important and integral aspect of ourselves whereby we can never be truly whole. For many males these considerations are outweighed by the need to choose a vocation and fulfill their roles as providers, husbands, fathers, and employees.

Aron, A., & Aron, E. (1997). Sensory-processing sensitivity and its relation to
introversion and emotionality. Journal of Personality and Social Psychology, 73, 345-368.

Aron, E. (2010). Psychotherapy and the highly sensitive person: Improving
outcomes for that minority of people who are the majority of clients. New York, NY: Routledge.

Aron, A., Aron., E., & Jagiellowicz, J. (2012). Sensory processing sensitivity: A
review in the light of the evolution of biological responsivity. Personality and Social Psychology Review, 16, 262-282.

This site uses Akismet to reduce spam. Learn how your comment data is processed.